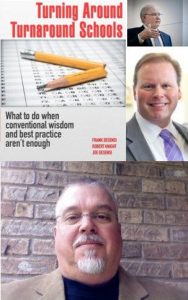 TURNING AROUND TURNAROUND SCHOOLS is a book that explains a practical approach for helping struggling schools in today’s educational environment of high stakes testing and accountability. It describes the efforts of a group of educators to deal with the changes caused by the standards-based reform of the early 1990s. The book chronicles the changes in perceptions, practices and assumptions made by these educators during their 20 years of working with “turnaround schools.” The authors focus on areas that produced the greatest leverage in changing schools (e.g., identifying all of the learnings and learner characteristics required by standards or developing causal data streams) and on some of the barriers that made these high leverage strategies difficult to implement (e.g., compliance cultures or entrenched programs). The book develops a new approach to the idea of intentional education, to educating the whole child and to the process of using data to inform instruction. A major emphasis of the book is that change must be rooted in “output” not “input.” Many of the early failures of conventional wisdom could be traced back to the fact that leaders were trying to change adult work, strategies or materials without first defining the output that was expected from the students or identifying the causes of off level performance. The authors don’t present their approach as a magic bullet to solve all turnaround school problems. Rather, they document how they had to address the fact that preconceived realities and assumptions limited their ability to move schools in a way that would predictably improve student performance. Their hope is that this book will stimulate a similar reevaluation in the readers so that they can come to grips with personal assumptions and deal with the barriers that they will face as they come to grips and try to change practice in their schools.

As the writers of Turning Around Turnaround Schools, we had been working on our book for some time and were stuck in the mud. We all read On Your Mark, went through the exercises, and now we have a voice, a target audience and a thesis statement for what we want the book to be. Thanks to Cathy and her coaching, our new book is a reality!